Black and white photograph of a portion of Weeki Wachee's gift shop, taken in the 1960s. 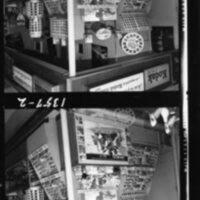