Weeki Wachee Mermaid Florence McNabb drinking an RC Cola underwater in the 1960s. Florence is kneeling on some seagrass, holding the airhose to her side. Weeki Wachee mermaids drank soda and ate bananas during their shows, before the mermaid shows became plays. At one point, RC Cola sponsored Weeki Wachee. 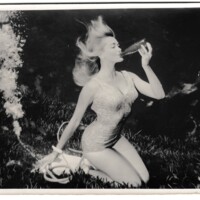