Letter of Thanks from a Representative of Dorothy Gray, Ltd. To Weeki Wachee Mermaid Rebecca Stahlhut, 1975

Letter written by Dorothy Gray, Ltd. Publicity Director Maureen Logan to Weeki Wachee Mermaid Rebecca Stahlhut (later Rebecca Young). The letter was written on April 24, 1975. In the letter Maureen thanks Rebecca for modeling Dorothy Gray products, and lets Rebecca know that Dorothy sent the mermaids a bunch of their products as a thank you. Dorothy Gray was a company that sold skin care products and makeup. In the years after ABC purchased Weeki Wachee Springs and grew the attraction, many makeup, swimsuit, and swimwear products partnered with Weeki Wachee Springs to advertise their brands. 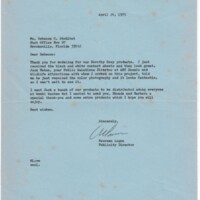