Bicentennial edition of Weeki Wachee Springs' trifold brochure, c. 1976. The mermaid mock playing the flute is Rebecca Young (previously Stahlhut). This photoshoot is the one she is most proud of from her time as a Weeki Wachee Mermaid. The photoshoot took several hours just to this this one picture, as everyone's hair, costumes, and the flag had to be in correct positions. The inside of the brochure lists the attractions and mentions the special "salute to the Bicentennial, 'Happy Birthday America!'" 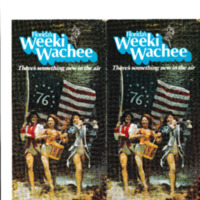