Weeki Wachee Springs Bird Department Manager Bonnie Georgiadis about to release one of the two bald eagles she helped rehabilitate. She rehabilitated an eagle in 1985. The eagle got caught in some barbed wire and broke its collarbone at a cattle ranch near Weeki Wachee. The 4-year-old female dubbed Victoria recovered at Busch Gardens for four months and was then sent to Weeki Wachee to be rehabilitated for two months. In order to retrain the eagle, Bonnie had to train the bird to fly short distances from perch to perch and reward Victoria with treats. Bonnie Georgiadis worked at Weeki Wachee for a total of 37 years. 13 years as a mermaid and trainer, 7 as a show producer and choreographer, and the rest of her time at the park as the bird department's manager. 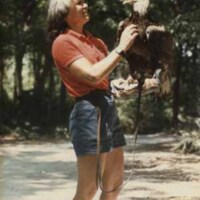