Mermaid Bonnier Georgiadis sitting on the edge of the underwater theater's windows holding a microphone, announcing a show. Two mermaids are pictured behind her in mid pose. Bonnie Georgiadis worked at Weeki Wachee for a total of 37 years. 13 years as a mermaid and trainer, 7 as a show producer and choreographer, and the rest of her time at the park as the bird department's manager.

Copyright to this resource is held by Sharon Cihak Elliot and is provided here by RICHES for educational purposes only. 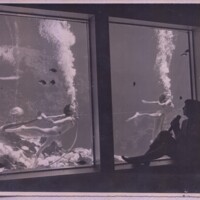