Bonnie Georgiadis assisting an archeological dig of a Native American burial mound at Weeki Wachee Springs in July of 1970. She is using archeological tools to uncover a vase. The dig was conducted by the University of Florida. 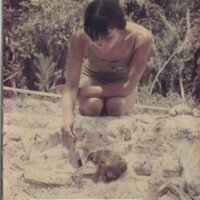