Geanie L. W. Brooks in her Welding Uniform at the McCloskey Shipyard in Tampa during WWII

Geanie L. W. Brooks in her Welding Uniform at the McCloskey Shipyard in Tampa during WWII

Geanie L. W. Brooks in her welding uniform at the McCloskey Shipyard. Geanie learned how to weld and work with heavy machinery at this shipyard during World War II. McCloskey Shipyard paid welding trainees 63 cents and hour to train there and 17% of their workforce during the war were women, which was twice the national figure. In the 1950s, Geanie worked as a waitress at the Patio Restuarant at Weeki Wachee Springs and later became a mermaid. She left this position in 1957. After Weeki Wachee, Geanie drove bulldozers, repaired bulldozer tracks, and drove a dump trunk. Even later, she worked as a bookkeeper, real estate agent, bowling instructor, and department store manager. Her last job was at Home Depot. She left the workforce upon turning 80 years old. According to a two-page life story Geanie wrote, "My family thought I was 'liberated' before anyone had even heard of 'women's liberation.' I always knew men made more money than women, so I applied for men's jobs, knew what they made, asked for it, and got it. (Can't hurt to ask right?) Sometimes I even made more, if I was able to get a percentage of a dumptruck haul."

Original owned by Shirley Herdge, and published by RICHES. 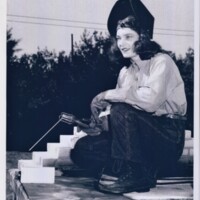 “Geanie L. W. Brooks in her Welding Uniform at the McCloskey Shipyard in Tampa during WWII.” RICHES of Central Florida accessed August 13, 2022, https://richesmi.cah.ucf.edu/omeka/items/show/11171.