Color postcard of Weeki Wachee Springs Mermaid Bonnie Georgiadis in a costume, mid-ballet move during an underwater performance. Text on back of postcard reads, "The underwater acrobatic butterfly ballet is just one of eight big scenes produced for the new underwater spectacle at the Spring of Live Mermaids, Weeki Wachee, Florida. Color Photo by Ted Lagerberg." Handwritten beneath previous text reads, "Feb 13-64." 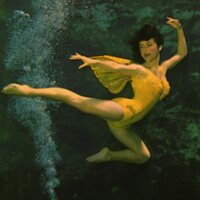 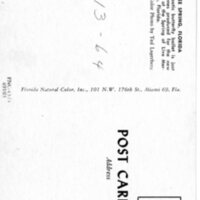