The staff of the Weeki Wachee Holiday Inn standing in front of the hotel's iconic sign. The marquee on the sign reads, "Our 9th Anniversary June 5 1975." This Holiday Inn was located directly across the street from Weeki Wachee Springs and opened in 1966. 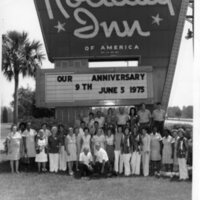