Kodak Safety Film Strip consisting of two images. These images show two Weeki Wachee mermaids performing a scene from "Peter Pan." One mermaid is in a Captain Hook costume and the other is in an alligator costume. A prop pirate ship is pictured behind the mermaids. Image was taken sometime in 1971, when the show was performed.

Originally created by Sparky Schumacher, owned by Karen Geiken, and published by RICHES.

Copyright to this resource is held by Karen Geiken and is provided here by RICHES for educational purposes only. 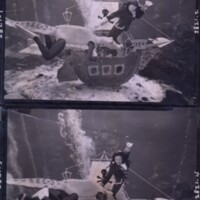