Letter from Cecil A. Tucker II, president of the Seminole County Historical Society, to George Percy, director of the Division of Historical Services, in support of the restoration and preservation of the Sanford State Farmers' Market in 1991.

Digital reproduction of original letter from Cecil A. Tucker II to George Percy, May 15, 1991.

Copyright to this resource is held by Cecil A. Tucker II and is provided here by RICHES of Central Florida for educational purposes only.

Seminole County Historical Society
May 15, 1991
Mr. George Percy, Director
Division of Historical Resources
R. A. Gray Building
500 South Bronough Street Tallahassee, Fl 32399-0250
Dear Mr. Percy,
On behalf of the officers, directors, and members of the Seminole County Historical Society, it is with considerable pleasure that I write this letter of support for the request. for a Special Category Grant for the restoration, preservation, and conversion to a museum of Unit 5 at the Sanford State Farmer's Market.
Unit 5 was used primarily as a citrus packing house and is one of the original buildings in the first state owned farmer's market complex in the nation.
We are currently in the process of getting it placed on the National Register of Historic Places in America.
The proposed museum will bring to the attention of the public a portion of little known history of how projects such as the farmer's market system helped shape the economy and destiny of re¬gions throughout our state and nation.
In addition, the anticipated exhibits will reach far beyond this in their interest level of the old tools, machinery and en¬gines of yesteryear.
Should any additional information concerning the historical significance of this project or any part of the grant request be needed, please do not hesitate to call upon us to provide it.


CC: Board of Seminole County Commissioners 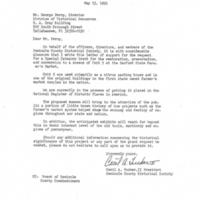