The skull of Lewis Thornton Powell. Also know by the alias "Lewis Paine" or "Lewis Payne," Powell was born on April 22, 1844 in Randolph County, Alabama. He was the son of Reverend George Cader Powell, the founder of Baptist Church in Oviedo, Florida, and also the first pastor of the Geneva Baptist Church, and Patience Caroline Powell. The Powell family migrated to Georgia when Lewis was three and later to Live Oak in 1859 when he was 15.

During the Civil War, Lewis Powell fought with the Conferderacy's Second Florida Infantry, Company I and was wounded and captured at the Battle of Gettysburg in Pennsylvania. He was sent to a Union hospital in Pennsylvania and later in Baltimore, Maryland. However, Powell escaped the hospital and joined the Confederacy's 43rd Battalion Virginia Calvary.

Captured and tried, he was found guilty of conspiracy to commit murder and treason, and hanged with the other conspirators on July 7, 1865. His body was buried in the prison courtyard and moved several times. At some point, a caretaker removed the skull, which ended up in the Ford Theater Museum. It was later taken to the Smithsonian's Department of Anthropology. In the 1990s, when Native American tribes requested that the Smithsonian return the bones of Native Americans for a proper burial, a skull was found with a tag identifying it as belonging to Lewis Thornton Powell. In 1994, the skull was brought to Geneva, where his surviving nearest relative lived. A service was held and the skull was buried in the Geneva Cemetery near the grave of his mother, Patience Caroline Powell. His body was buried in a pauper's grave outside of Washinton, D.C.

Copyright to this resource is held by the Geneva Historical & Genealogical Society and is provided here by RICHES of Central Florida for educational purposes only. 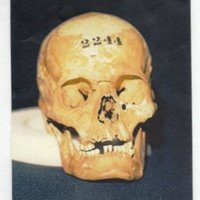