Two palm tables designed by A .J. Holder, a pioneer in Geneva, Florida, during the late 19th century. The palm tables were crafted from palm fronds, palm boots, and palm trunks. Holder registered the table design with the United States Patent Office, which was granted on May 13, 1890. The palm tables and the original patent documentation were donated to the Museum of Geneva History. The photograph itself is also part of the original patent documentation.

Geneva is a community in Seminole County. The area was originally inhabited by the Timucuan tribe as early as 2000 B.C.E. Between 1765 and 1766, John and William Bartram explored the St. Johns River, including the area that would become Geneva, which was inhabited at the time by the Seminole tribe formed in the 1760s. New settlers arrived and settled in Harney Cove during the 1843-1845 period. Harney Cove was renamed Geneva in 1880.

Copyright to this resource is held by the Geneva Historical & Genealogical Society and is provided here by RICHES of Central Florida for educational purposes only. 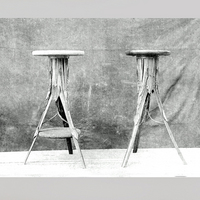