Lyman High School's Greyhound varsity football squad for the 1965-1966 school year. Lyman is a Seminole County Public School located in Longwood, Florida. In 1923, a board of trustees agreed to construct a new school to accommodate the growing population in the Longwood and Altamonte Springs area. Construction began at 1725 County Road 427 in 1924 and opened in September 1924 with Professor Howard Douglas as its first principal. Lyman School, as it was originally called, was named after Howard Charles Lyman, a citizen who was active in planning the school's establishment but died a few days before construction began. In just two years, Lyman became an accredited junior high school and its campus had been expanded with six rooms. With W. J. Wells as principal, the Lyman School achieved accreditation through 12th grade in 1929. In 1963, the school was renamed Lyman High School when it became an accredited institution with Carlton D. Henley as principal. In 1966, Lyman High became integrated with both white and black students.

A new campus was constructed at 865 South Ronald Reagan Boulevard in 1969. The original campus became R. T. Milwee Junior High School, named after Rayburn T. Milwee, Sr., who taught at Lyman from 1939 to 1949, served as principal from 1949 to 1952, and served as Superintendent of Seminole County Schools from 1952 to 1967. In 1970, Seminole County transitioned from the junior high school system to the middle school system, causing Lyman High School to now accommodate 9th grade in addition to 10th, 11th, and 12th grades. During the transition period from 1970 to 1971, the school mandated "double sessions," in which half of the school would attend from 7:00 am to 1:30 pm and the other half would attend from 11:30 am to 6:00 pm.

In June of 1971, the Milwee Middle school, where Lyman's original campus was, closed and reopened as a satellite campus for Lyman High School during the 1971-1972 school year. For the 1972-1973 academic year, all Lyman students returned to the primary campus and the satellite campus was used for Lake Brantley High School instead. In 2000, Lyman established the Institute for Engineering, a magnet program emphasizing mathematics and science.

The Greyhound Staff of 1966

Original black and white photograph by The Greyhound Staff of 1966.

Copyright to the resource is held by Lyman High School and is provided here by RICHES of Central Florida for educational purposes only. 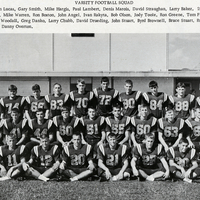