Episode in the Orlando Philharmonic Orchestra's 20th Anniversary video series, chronicling the orchestra's history in Central Florida. This episode features an interview with Hugh James and Caroline James, patrons of the orchestra. Topics in the video include how the James got involved with the orchestra, working with the people and musicians of the OPO, the Philharmonic's relationship with patrons, the orchestra's role in the community, and ticket sales and subscribers.

Caroline
I was retired. He was still working. Uh, so I dragged him in slowly but surely it's well.

Hugh
If you sort of had to ask, “What is the nicest thing about working with the OPO[ Orlando Philharmonic Orchestra]?” It's the people. it's the people. Um, especially, in some ways, the musicians. They’re not people in fancy suits across there on the stage. They’re regular folks and they are just nice people. They’re all such nice people.

Caroline
The Philharmonic really reaches out to its patrons and wants every patron to know they are the most important person in that auditorium. And we, um—we have post-concert receptions, where you get to meet the musicians, the staff, guest artists, fellow patrons. And there’s a real mixing and mingling and you feel like you're part of a big family.

Hugh
The Philharmonic has become an integral part of the community. Um, both with its concerts, with its presentations, with its opera, and with all the things that it's doing for young people. So, um, I think the recognition in the community is far, far higher than it was 10 years ago. With each concert, we have less general seating tickets to sell. That’s the bad news [laughs]. The good news is that’s because they are full of subscribers. 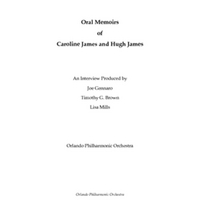