Episode in the Orlando Philharmonic Orchestra's 20th Anniversary video series, chronicling the orchestra's history in Central Florida. This episode features an interview with Lyman Brodie, Principal Trumpet and board member. Topics in the video include an anecdote about outdoor concert, the earliest days of the OPO, educational programs, venues, performing with John Williams and other experiences with the orchestra, music played by the Philharmonic, and the role of orchestra members as community members.

In addition to the Orlando Philharmonic Orchestra, Lyman A. Brodie performs for the Dallas Wind Symphony and the Black Music Repertory Ensemble. He also is the Associate Dean of the College of Arts and Humanities and a Professor of Music at the University of Central Florida (UCF). Previous positions that Brodie has held at UCF include Chair of the Department of Music and President of the University Wide Counsel of Chairs and Chairmen of the Campus Review for the Strategic Planning Initiative. Additionally, Brodie has served as a national grant review panelist for the National Endowment for the Arts Music Program, an elected board member of Chamber Music Directors of the Orlando Philharmonic, an Advisory Board member of the Arts Presenters, and a voting member of the National Academy of Recording Arts and Sciences.

In celebration of the Orlando Philharmonic Orchestra's 20th Anniversary season, this video series chronicles the orchestra's two decades of history in Central Florida. In this episode, Principal Trumpet and board member Lyman Brodie talks about his role in the orchestra.

Brodie
We were doing a—an outdoor concert—a park concert. And I honestly can't remember exactly where it was, but the interesting thing about it was it started raining. I mean, downpour. And, uh, instead of us stopping the program, uh—I remember Andy Lane[1] was conducting the concert and he invited the audience to come under the tent [laughs]. And so we had the entire audience that was out there. Instead of being in the rain, they were under the tent with the orchestra. And we continue playing the concert [laughs].’

The, um—the early days, of course, um, were pretty tough, uh, because we didn't have a home. Um, we did concerts in various venues around the city.

Um, we, um, started of course by doing programs to—of educational quality. Both for young people's concerts, and for the opera, and for the ballet. And, um—and we started by doing those kinds of service-related kinds of things and then programs that were, uh, basically, um fee-based. So we weren't doing subscription programs as such at the very beginning. And, um, as we grew, we start doing more those kinds of things, but the venues changed quite a bit for the first three years. I think it was not until the third or fourth year that we actually were able to mount a problem in the performing arts center—Bob Carr [Performing Arts Centre].

Performing with John Williams for the opening of the Harry Potter theme park, you know, was a real thrill. There have been many, many, many great experiences performing with the Orlando Philharmonic.

The, uh—the same music that we look at in Orlando is the same music that the performers look at a New York [City, New York] in Chicago[, Illinois], and Dallas[, Texas], and Los Angeles[, California], in Berlin[, Germany], and Vienna[, Austria].

Um, when we perform [Gustav] Mahler, or [Johann] Strauss, or [Sergei] Prokofiev, or [Dmitri] Shostakovich, those are the same parts everyone are performing all over the world. The members of the orchestra are members of the community. Um, we’ve been able to, fortunate enough to told a number of additions and—and bring in some really, really good performers, so we're really fortunate for that. And all of those people have become part on the community as well. 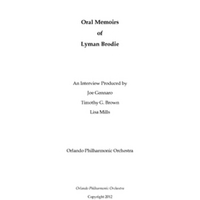