Vivian is also the oldest sister of Lula Yvonne Black (1942-); Charles Samuel Black (1945-); Pilgrim Black, Jr. (ca. 1947-); and Patricia Ann Black (1956- ); as well as the half-sister of David Harry Black (1929-2012). Vivian graduated from Crooms High School around 1958. She married Benjamin Moore Hawkins in the 1960s and moved to Rochester, New York. The couple had two children together: Benjamin Moore, Jr. (1960-) and Fejetta Michelle Hawkins (1972-). Vivian worked for several years in a factory until she suffered a stroke at age 35, when the left side of her body became completely paralyzed. She moved back to Sanford, Florida, after her stroke.

The Fernald-Laughton Memorial Hospital
Sanford, Florida
BIRTH CERTIFICATE
This Certifies that Vivian Black was born in the FERNALD-LAUGHTON MEMORIAL HOSPITAL AT 500 OAK AVENUE at Sanford, Florida, on the 11 day of October A.D., 1940
IN WITNESS THEREOF, the said Hospital has caused this certificate to be signed by its duly authorized officer. 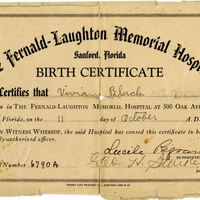