An original letter of correspondence between brothers and business partners Joshua Coffin Chase and Sydney Octavius Chase. Topics discussed in the letter include the idleness of the packinghouse at Isleworth Grove due to lack of fruit, the poor texture of the fruit this season due to unfavorable weather, the new Director of the Florida National Bank Edward Ball, and utilizing Bruce Leighton for making contacts.

ISLEWORTH. The packing house was idle as there was not enough fruit on hand to work upon. Crowell estimates that fully one thousand or more boxes of tangerines still to be picked, which would make him until Thursday at the present rate. We really should have a force picking oranges on the lemon grove, so there would be something in the house to work upon and reduce the overhead. When the writer drove down to the Island he found automobiles stacked around the various places and when he drove down to the old house occupied by the negro family, two white men appeared who were evidently doing some running, but at that time loafing. Crowell was on a road near Overstreet, tacking up a "No Trespassing" sign.

We will have to get right in behind the force out there and push operations, there is no reason why Crowell should not be able to pick up an additional force for oranges if his regular pickers are all tied up with tangerines. There is no elasticity about the picking operations and there appears to be too many obstacles in the way of getting out the number of cars.

The texture of the fruit is not up to previous seasons, the peel is rough, coarse and thick. This applies to practically all parts of the grove. This warm weather is having an unfavorable effect and if this hot spell is followed by rain and wind, it will blow down a lot of fruit. The writer has just gone over the situation with Randall and feels that we should move at the rate of two cars a day, loading straight cars of each brand. We have shipped so far about 14 cars of grapefruit, or nearly half of the estimated crop. Believe it would be advisable to move grapefruit on orders unless there is a very decided uplift in price. So much of the crop is running to small sizes that it would be advisable to move off the grapefruit just as fast as we can find a place for it.

Will endeavor to close up matters in New York at the earliest possible date, but it will be necessary for me to spend one day in Philadelphia and return from there. Will wire you.

If the vegetable department wants me to handle any matters for them, you can research me there or in New York.

Cannot recall the name os DuPont's brother-in-law, but I am under the impression that he is now a Director of the Florida National Bank, he happens to be a brother of the present Mrs. DuPont, , they have a habit of changing their wives every so often and the wife of this one is from California. Cannot recall the name of the Jacksonville DuPone but I am under the impression that he is a crank of the first water. He has some throat trouble and has installed some kind of a silver tube. I do not believe that he would do you very much good.

During the war a man by the name of Bruce Leighton commanded the U.S.Navy Aviators at Killinghome, England, where Ben was located, within the last few months he has resigned from the U. S. Navy and accepted a very high position with the [?]right Airplane Interests. He happens to be brother-in-law of DeWitt Miller, who operates a hotel here in Orlando. Understand that he expects to be in this territory shortly. He might be a medium of reaching some of the people you want to get in touch with. In my opinion, if Fort Caswell could be utilized it would be for sea-planes and not for land machines. Will try to pick up some information while I am away. 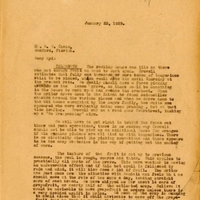