A warranty deed certifying the transfer of land from Michael Gladden, Jr. and Elizabeth Gladden to the State Bank of Apopka for $100 on May 20, 1921. The property transferred was the west quarter of Lot 17 of Block J in Apopka, Florida. The deed was certified by the circuit court clerk and deputy clerk of the Circuit Court of the 17th Judicial Circuit of Orange County on May 25, 1921.

Michael Gladden, Jr. (1899-1982) was the executor of the estate of George W. Oden (1862-1939), a successful businessman and citrus grower in Apopka, Florida. Gladden was born in South Carolina in 1899. He married Elizabeth Gladden and together they had a son, William, who was born around 1904. According to census records, the Gladden family had moved to Jacksonville as early as 1910 and then moved to Apopka. After Oden's death in 1939, Gladden continued to manage the legal documents of Oden's estate.

Collected by Carol E. Mundy between 1990 and 2009.
Purchased by the University of Central Florida Libraries, Special Collections and University Archives in 2009.

Michael Gladden Jr
To
The State Bank of Apopka.
Date
ABSTRACT OF DESCRIPTION

State of FLorida,
County of Orange
On this 25th day of May A. D. 1921, at 8 o'clock a.m., this instrument was filed for record, and being duly acknowledged and proven, I have recorded the same on pages 588 of Book 214 in the public records of said County.
IN WITNESS THEREOF, I have hereunto set my hand and affixed the seal of the Circuit Court of the 17th Judicial Circuit of said State, in and for said County.
13[?] Clerk.
[?] D. C.
The H. & W. B. Drew Company, Jacksonville, Fla. 8-30-17
RECORD VERIFIED

State of Fla
County of Orange
I HEREBY CERTIFY, That on this 20th day of May A. D. 1921, before me personally appeared Michael Gladden + wife Eliz Gladden to me known to be the person described in and who executed the foregoing conveyance to THE STATE BANK OF APOPKA and severally acknowledged the execution thereof to be this free act and deed for the uses and purposes therein mentioned; and the said Eliz Gladden the wife of the said Michael Gladden on a separate and private examination taken and made by and before me, and separately and apart from her said husband did acknowledge that she made herself a party to the said Deed of Conveyance, for the purpose of renouncing, relinquishing and conveying all her right, title and interest, whether of dower or of separate property, statutory or equitable, in and to the lands therein described, and that she executed said deed freely and voluntarily and without any constraint, fear, apprehension or compulsion of or from her said husband.
WITNESS my signature and official seal at Apopka, Fla in the County of Orange and State of Fla the day and year last aforesaid.
Frank S. Wetterly
Justice of the Peace
Dept. No. 6 Orange Co.

Signed, sealed and delivered in our presence: 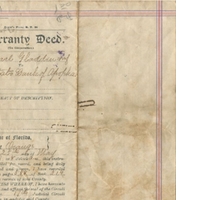