Goldsboro is one of the historic African-American communities in Sanford, Florida. On December 1, 1891, William Clark, a storeowner and businessman, organized 19 other black registered voters to incorporate the town of Goldsboro, which was the second African-American city to be incorporated in Florida. Goldsboro's early economy was driven by rail yards, fields, groves, ice houses, and produce houses. A year after its incorporation, Goldsboro opened a school led by Katie Stubbins. Goldsboro's proximity to Sanford prevented it from expanding further west. Instead, the City of Sanford passed a resolution to absorb Goldsboro, despite opposition from the latter town's officials. Nonetheless, the Florida Legislature revoked Goldsboro's incorporation, in order to allow its absorption into Sanford on April 6, 1911. The identity of Goldsboro began to erode as the City of Sanford renamed several of its historical streets. In 2007, Goldsboro was included in plans for Sanford's revitalization efforts. In 2011, the Goldsboro Historical Museum was opened in the town at the site of its original post office.

Copyright to the resource is held by the Orange County Regional History Center and is provided here by RICHES of Central Florida for educational purposes only. 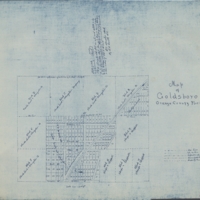