A certificate awarded by the Florida House of Representatives to Creative Sanford, Inc. on June 23, 2011. This award recognizes the accomplishments, work, and awards received by Creative Sanford. Some of the achievements cited include the Celery Soup production Touch and Go, the 2011 Cultural Preservation Award, and the completion and transcription of over 100 oral histories. The document is signed by Chris Dorworth, the Florida State Representative for District 34.

Creative Sanford, Inc. is a non-profit organization created to manage Celery Soup community theater productions. The original idea for the Celery Soup project came from Jeanine Taylor, the owner of a folk-art gallery on First Street in Sanford, Florida. Their first production was Touch and Go, a play focusing on the people of Sanford and their determination to overcome various obstacles, including the Freeze of 1894-1895, the fall of Sanford's celery industry, and the closing of Naval Air Station (NAS) Sanford in the 1960s. Richard Geer and Jules Corriere, partners from Community Performance International, were in charge of assessing oral histories, converting them into scenes for the play, and writing original songs. Director Geer also used an all-volunteer cast from the local community, many of whom were not experienced actors. In the process of producing the show, Creative Sanford decided to rehabilitate an historic building, the Princess Theater, which is located on 115 West First Street and owned by Stephen Tibstra. The Creative Sanford offices are housed in the Historic Sanford Welcome Center, located at 203 East First Street.

Originally created by the Florida House of Representatives and Christ Dorworth.

Copyright to the resource is held by Creative Sanford, Inc. and is provided here by RICHES of Central Florida for educational purposes only.

"WHO IS CREATIVE SANFORD, INC?" Celery Soup. http://www.celerysoupsanford.com//about.
"About: History and Purpose." Celery Soup. http://www.celerysoupsanford.com/about/
"Tales of Sanford's resilience are the stars of 'Touch and Go'." The Orlando Sentinel, October 20, 2010. http://articles.orlandosentinel.com/2010-10-20/entertainment/os-celery-soup-sanford-20101020_1_oral-histories-swamp-gravy-celery-soup. 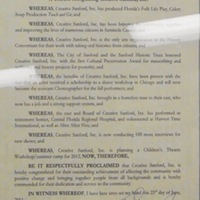