American Soldiers with Woman During World War I

American Soldiers with Woman During World War I

Two American soldiers, presumably the Gormley brothers, with a woman during World War I. It is also likely that the woman photographed is a relative of the Gormleys. Charles Ernest Gormley and George Gormley were originally from Kansas, but moved to Sanford, Florida, with their family shortly before WWI. The brothers served alongside each other in France from August 13, 1917, to April 14, 1919. Charles' daughter, Luticia "Tish" Gormley Lee, was the contributor of this photograph.

Before entering World War I, the United States maintained a policy of neutrality, although the U.S. continued to supply the Allies: Great Britan, France, and Russia. The U.S. officially entered the war on April 6, 1917, in response to Germany's return to all-out submarine warfare on all commercial ships sailing for Great Britain and Germany's offer for military alliance to Mexico via the Zimmerman Telegram. The U.S. mobilized over four million military personnel through the course of American involvement in the war and lost 110,000 casualties. The U.S. vastly expanded its government and dramatically increase the size of its military during World War I.I.

Copyright to this resource is held by uticia "Tish" Gormley Lee and is provided here by RICHES of Central Florida for educational purposes only. 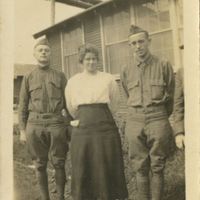 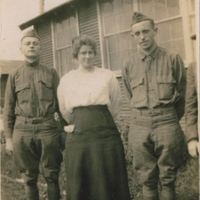