A letter from A. W. Macfarlane to Henry Shelton Sanford dated December 29, 1884. Macfarlane was the secretary for the Florida Land and Colonization Company (FLCC) from 1884 until its dissolution in 1892. Presumably, he worked in the company's main office, located at 13 Austin Friars in the business district of London, United Kingdom. In this letter, Macfarlane discussed various aspects of the company's financial state, noting disappointment in lower-than-expected land sales in Florida. At one point, Macfarlane expressed concern that "[t]he cash on hand in Florida, in the office [and] banks, at the end of November amounted to less than £400 not more than required for the business." The letter conveyed the often tenuous nature of the company's efforts to turn a profit in Florida. 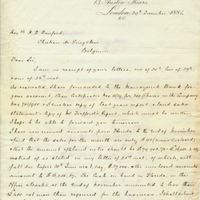