Letter from A. W. Macfarlane to Henry Shelton Sanford (January 8, 1885)

Letter from A. W. Macfarlane to Henry Shelton Sanford (January 8, 1885)

Letter from Macfarlane to Sanford (January 8, 1885)

A letter from A. W. Macfarlane to Henry Shelton Sanford dated January 8, 1885. Macfarlane was the secretary for the Florida Land and Colonization Company (FLCC) from 1884 until its dissolution in 1892. Presumably, he worked in the company's main office, located at 13 Austin Friars in the business district of London, United Kingdom. In this letter, Macfarlane referenced the company efforts to raise a final £3,000 of a needed £5,000 to complete a land acquisition deal in Florida, a deal advanced and encouraged by Henry Sanford. Macfarlane noted that the company's bank, Barclay & Company, refused to provide an advance of funds without a joint guarantee from all of the members of the company's board. Macfarlane noted that some of the board members had objections to this requirement, reflecting a gulf between business strategies endorsed by Sanford and his fellow board members. 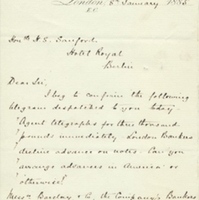