Letter from A. W. Macfarlane to Henry Shelton Sanford dated January 20, 1885. Macfarlane was the secretary for the Florida Land and Colonization Company (FLCC) from 1884 until its dissolution in 1892. Presumably, he worked in the company's main office, located at 13 Austin Friars in the business district of London, United Kingdom. In this letter, Macfarlane discussed several recent decisions taken by the board of directors of the FLCC. He explained how the local FLCC agent based in Sanford, Florida, E. R. Trafford, was in the process of purchasing tracts of land on behalf of the company, adding that $15,000 had been raised to facilitate Trafford's purchase. The money raised for the land purchase was loaned from the London-based bank Barclay & Company. Macfarlane noted that, in order to obtain the money, the company needed to offer the bank securities in the form of land notes valued at twice the amount of the loan requested. Macfarlane deemed it necessary to note that, following the most recent loan, the company was indebted to the bank in the amount of £5,144.13, of which £2,000 would be due by April 1885. Macfarlane stated that, with the bank loan and company debentures combined, the FLCC had nearly £30,000 due by the end of the fiscal year in early July. Reflecting the often tenuous nature of the company's finances, Macfarlane added that "[t]he [Florida] agent in his report last June estimated remittances at £14,000 of which as yet only £2,200 has been received." The secretary concluded the matter by stating that "[t]he urgency of making prompt financial arrangements has in no way been relieved and I am directed again to state that the Directors consider they are incurring grave responsibility by having this question open." The stringent financial guaranties needed by the company's bank for further loans are significant. The bank's steep terms possibly reflect both the uncertainty of profitability associated with Florida land sales as well as the uncertain viability of the FLCC. 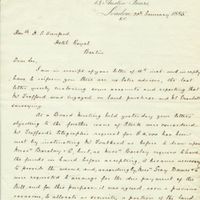