A letter from A. W. Macfarlane to Henry Shelton Sanford dated February 21, 1885. Macfarlane was the secretary for the Florida Land and Colonization Company (FLCC) from 1884 until its dissolution in 1892. Presumably, he worked in the company's main office, located at 13 Austin Friars in the business district of London, United Kingdom. In this letter, Macfarlane relayed reports to Sanford sent by the FLCC's local agent in Florida, E. R. Trafford. At the time, Sanford was staying in the German capital of Berlin, presumably due to his participation in the Berlin Conference of 1884-1885 regarding European trade and colonization in Africa. Macfarlane conveyed the small amount of sales achieved in recent months $1980 for the month of December 1884 and only $434.80 for the entire month of January. He noted that the company's agent believed that the fall in company sales was due in part to a general slowing of business, noting that "[e]everything throughout not only the state but the country is dull." The agent also blamed the "New Orleans Exposition [that] seems to have taken the visitors from Florida this winter." The agent was referencing the World's Fair of 1884-1885, based in New Orleans, Louisiana. The report relayed by Macfarlane reflected the challenges of turning a profit from the company's Florida investments. 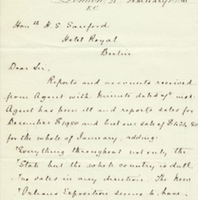