A letter from A. W. Macfarlane to Henry Shelton Sanford dated May 12, 1885. Macfarlane was the secretary for the Florida Land and Colonization Company (FLCC) from 1884 until its dissolution in 1892. Presumably, he worked in the company's main office, located at 13 Austin Friars in the business district of London, United Kingdom. Based on this letter, it appears that Sanford had previously proposed the construction of a tramway light railway within the company's property in Florida. Macfarlane informed Sanford that the matter had not yet been discussed among board members and that the subject would be discussed at a later date. Macfarlane added that the previous meeting had been dedicated to the reviewing of company accounts. Subsequent correspondence from Macfarlane, resumed in September 1885, did not make further reference to the proposed tramway and it is unclear if the idea was ever pursued. However, based on the strained relationship between Sanford and the other company board members, as well as their general mistrust of Sanford's business proposals, it is possible that the board purposefully delayed discussing the matter with the intent of preventing it from materializing.

Digital reproduction of original letter from A. W. Macfarlane to Henry Shelton Sanford, May 12, 1885. 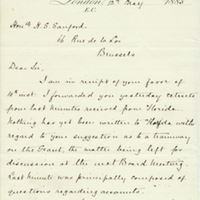