Letter and Statement from A. W. Macfarlane to Henry Shelton Sanford (September 29, 1885)

Letter and Statement from A. W. Macfarlane to Henry Shelton Sanford (September 29, 1885)

Letter and Statement from Macfarlane to Sanford (September 29, 1885)

A letter from A. W. Macfarlane to Henry Shelton Sanford dated September 29, 1885. Macfarlane was the secretary for the Florida Land and Colonization Company (FLCC) from 1884 until its dissolution in 1892. Presumably, he worked in the company's main office, located at 13 Austin Friars in the business district of London, United Kingdom. Attached to this letter is a statement listing the various acreage and book values of the company's property in Florida. The statement noted that as of September 1885 the company owned some 79,632.72 acres valued collectively at £84,262.12. At the time, the company owned land scattered throughout Florida in Alachua, Brevard, Hernando, Hillsboro, Manatee, Marion, Monroe, Orange, Polk, Sumter, and Volusia counties. It also owned settlements named Middleground and Anclote. Lastly, the company owned large tracts of land, including the Powell Grant and Sanford Grant, as well as the entire town of Sanford. At the time, the largest single property was the Sanford Grant at 7,813.42 acres. The county with the most scattered land held by the company was Polk County at 21,661.84 acres. The county with the smallest amount of land owned by the company was Volusia County, with only 79.91 acres.

Digital reproduction of original letter and statement from A. W. Macfarlane to Henry Shelton Sanford, September 29, 1885. 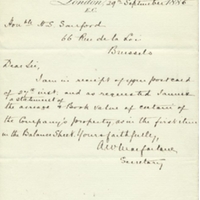