Letter and Statement from A. W. Macfarlane to Henry Shelton Sanford (October 2, 1885)

Letter and Statement from A. W. Macfarlane to Henry Shelton Sanford (October 2, 1885)

Letter and Statement from Macfarlane to Sanford (October 2, 1885)

A letter from A. W. Macfarlane to Henry Shelton Sanford dated October 2, 1885. Macfarlane was the secretary for the Florida Land and Colonization Company (FLCC) from 1884 until its dissolution in 1892. Presumably, he worked in the company's main office, located at 13 Austin Friars in the business district of London, United Kingdom. Attached to this letter was a small table listing the monetary amount of the company's total sales, property accounts, town improvements, as well as a listing of profit and loss for the years from 1881 to 1885. Macfarlane noted that the company's earnings from sales were appropriated, applying credit to the property accounts to cover the cost of sale as well as an additional quarter of the profit. The remaining balance was then distributed to the shareholders as dividends. Based on the chart, it appears that between 1881 and 1885 the company earned £51,492, of which £28,214 was distributed to shareholders in the form of dividends.

Digital reproduction of original letter and statement from A. W. Macfarlane to Henry Shelton Sanford, October 2, 1885. 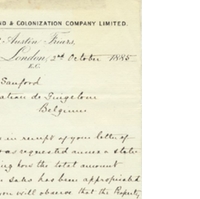