A letter from A. W. Macfarlane to Henry Shelton Sanford dated November 16, 1886. Macfarlane was the secretary for the Florida Land and Colonization Company (FLCC) from 1884 until its dissolution in 1892. Presumably, he worked in the company's main office, located at 13 Austin Friars in the business district of London, United Kingdom. In this letter, Macfarlane discussed several changing circumstances related to the company. First, he acknowledged that Henry Sanford would travel to America in order "to supervise the Company's affairs in Florida." This development was the result of several years of meager profits deemed "too small a scale to cover expenses [and] interest." As Macfarlane expressed to Sanford, "it is hoped that you may be able to infuse more life into the business." The letter also explained and justified the decision to name William Beardall as the successor to E. R. Trafford as the company's chief agent in Florida. Though Beardall "lacked some essentials for actively pushing sales," his lengthy tenure with the company and prior employment in Sir William MacKinnon's operations in East Africa had rendered him a "steady [and] trustworthy" employee in the eyes of the company. The letter reflected the company's ongoing challenges in finding steady and robust means of profit in its efforts to sell Florida land. 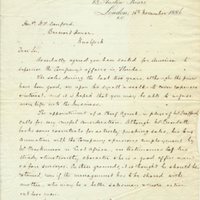