A letter from A. W. Macfarlane to Henry Shelton Sanford dated November 20, 1886. Macfarlane was the secretary for the Florida Land and Colonization Company (FLCC) from 1884 until its dissolution in 1892. Presumably, he worked in the company's main office, located at 13 Austin Friars in the business district of London, United Kingdom. This letter concerned a request made previously by Sanford for a "stamped transfer form" meant for the transfer of shares and debentures. According to the letter, Macfarlane had included a set of stamps, which acted as an obligatory duty on the transfer of shares. The stamps, he noted, "can be affixed to a transfer deed after execution." It is unclear what shares or debentures Sanford intended to transfer. 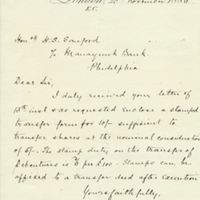