The building located at 307-311 South Sanford Avenue in Georgetown, an historic African-American neighborhood in Sanford, Florida. The earliest known occupants of Suite 307 were two African-American residents: M. J. Bradford in 1911 and Judge Williams in 1917. By 1924, Williams had vacated this residency and then ran his restaurant at 305 South Sanford Avenue from approximately 1924 to 1925. In 1926, Dixie Gardens Corp. Real Estate was listed at this address, as well as the Boteler-Jackson Company Inc., a wholesale confectioner business, was listed at Suite 307. By 1947, Howard Boteler was operating his business at Suites 305-307 independently of his former company. The Boteler Howard Company, a wholesale confectioner business, was run at 500-502 South Sanford Avenue from approximately 1952 to 1965. In 1965, this address was listed as vacant. By 1975, Café Tavern had taken over the lot.

In 1911, three residents were listed at 309 South Sanford Avenue: Peter Barkett, G. W. Wilson, and Jacob Frazier; the latter two were African Americans. Another African American, S. M. Harris, resided here in 1917. By 1924, James Tsacrios was operating his grocery from this location. The Style Shop Ready-to-wear was listed at this address in 1926 . From approximately 1947 to 1952, a black-owned bar, originally named C.C. Sheffield & Son Beer and later renamed C.C. Sheffield & Son Tavern, was located here. In 1965, Friendly Café was located at this address, though the café later moved to 320 South Sanford Avenue.

The first known occupant of Suite 311 was African-American resident W. R. Charlton in 1911. In 1924, I. E. Kersey & Son Meats was located here, but the lot was listed as vacant in 1926. From approximately 1947 to 1952, an African-American-owned bar, originally named Al's Tavern and later renamed Al's Place Tavern, was run at this address. By 1965, Bennie's Pool Room had been occupying this lot, but it became vacant by 1975.  At the time that this photograph was taken in January 2012, these lots were vacant with no building. 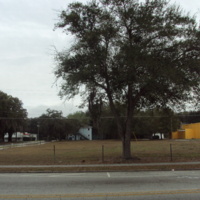