The Albertson Public Library, located at 101 East Central Boulevard in Downtown Orlando, Florida. Before there was a public library in Orlando, the local Sorosis Club ran a circulating library for the city. After years of running the library out of homes and clubhouses, the Sorosis Club joined the Board of Education in an effort to organize an official public library.

In 1919, the Mayor of Orlando, E. G. Duckworth, secured the corner of Central Avenue and Rosalind Avenue as the site of the new library. A $73,983 contract was drafted and Murry S. King was hired as the architect. On December 28, 1922, the cornerstone was laid and, on November 8, 1923, the Albertson Public Library opened with 20,000 books, which included the Sorosis Club's collection, as well as 12,000 books from Captain Charles L. Albertson, a retire New York police inspector for whom the library was named.

Near the end of 1963, plans for a new library were being made. The Albertson Public Library, along with two branches, were to be demolished in order to make room for the new building. In the meantime, a temporary location at 905 North Orange Avenue was used as the library headquarters. On August 7, 1966, the Orlando Public Library opened. Although the name of the library changed, Charles L. Albertson is still commemorated in the new library for his generous donation with a plaque at the entrance of the building, and the genealogy and local history section of the library is named after him.

Less than ten years later, in 1974, officials began to consider expansion of the library. In 1978, the Orlando City Counsel allocated the block of land to the west of the building for expansion. Architect Duane Stark was given the expansion task, as well as renovating the existing building. The current 290,000 square foot building opened on April 6, 1986. 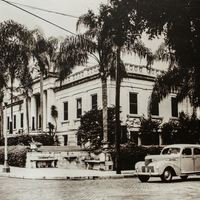