A receipt from the Savannah, Florida & Western Railway Company to Isaac Vanderpool for the transportation of goods, dated December 21, 1892. The Vanderpools were one of the original families in Maitland, Florida, with Isaac Vanderpool, the patriarch of the family, buying 160 acres of land in the year 1870. In 1876, after facing a large financial loss and disaster in New York, Isaac and his wife, Harriet Vanderpool, permanently moved to the Maitland area. At the time of their arrival, the area only had about four or five family homesteads and orange groves. Vanderpool was part of the first committee to help incorporate the town of Lake Maitland. The committee included Vanderpool, Henry S. Kedney, George Packwood, and Richard Packwood. 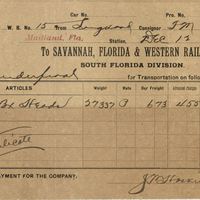