A memorandum from Jonathan French to Isaac Vanderpool, dated June 18, 1895. On behalf of French & Company, French offers a business deal with Vanderpool in regards to the purchase of Florida fruits and vegetables for the wholesale market. French & Co. was a produce wholesaler based at 116 Warren Street in New York City, New York. 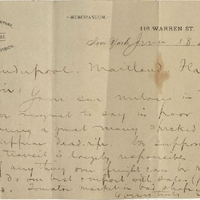