A letter from George B. Agnew to Isaac Vanderpool, dated May 21, 1895. On behalf of the National Produce Company as its secretary and treasurer, Agnew offers a business deal with Vanderpool in regards to the purchase of Florida fruits and vegetables for the wholesale market. The National Produce Co. was a produce wholesaler based at 635 Liberty Street in Pittsburgh, Pennsylvania.

Digital reproduction of original 1-page letter from George B. Agnew to Isaac Vanderpool, May 21, 1895.

Originally created by George B. Agnew. 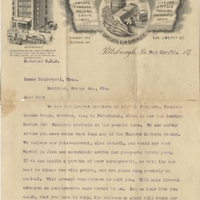