Invitation to the Springtime Chamber Music Concert at the Vanderpoel Mansion

Invitation to the Springtime Chamber Music Concert at the Vanderpoel Mansion

Concert at the Vanderpoel Mansion

An invitation to the Springtime Chamber Music Concert at the Vanderpoel Mansion, also known as the Vanderpoel House of History, located at 16 Broad Street in Kinderhook, New York. The concert was hosted by the Columbia County Historical Society on May 25, 1974.

Copyright to this resource is held by the Columbia County Historical Society and is provided here by RICHES of Central Florida for educational purposes only. 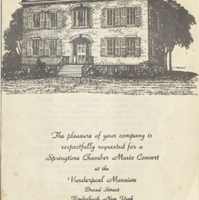