A memorial record for Mary Louisa Vanderpool (ca. 1880-1992), who passed away at the Orange County Hospital on December 12, 1922, at the age of 42. Vanderpool was born in Maitland, Florida, in 1880 and married her husband in 1906. Her memorial services were held at the Episcopal Church of the Good Shepherd in Maitland and Vanderpool was buried at the Maitland Cemetery. 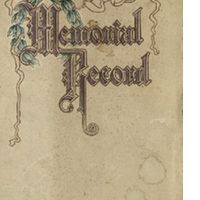