A letter from E. R. Trafford to Henry Shelton Sanford (1823-1891), dated January 31, 1883. In the letter, Trafford assessed the value of land owned by Sanford at Fort Gardiner Island. In the letter, he concluded that he knew "of no place in the State of Florida, so desirable from its many advantages for the cultivation of the lemon[,] pineapple[,] and other fruits of that class." He also stated the Fort Gardiner Island was attractive because of its relative proximity to the city of Sanford and its position on Lake Kissimmee. 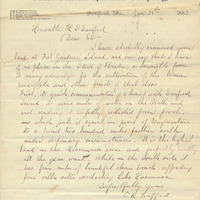