A letter from E. R. Trafford to Henry Shelton Sanford (1823-1891), dated February 10, 1883. The letter concerned the fate of one of Sanford's former employees, a Swedish immigrant who was arrested, presumably for theft, but never charged because of a lack of evidence. Trafford informed Sanford that the Swede had been advised to sue Sanford for some $3,000 in damages, adding that the ex-employee had indicated that he would be willing to drop the suit for a sum of $1,000. Trafford wrote that he had responded that it was a "case of black-mail" and that he thought that "we should put both him and his lawyers in jail." The letter demonstrates the role of Sanford's Florida agents and managers in maintaining affairs in Sanford's absence, as well as the conflicts between Sanford and the Swedish laborers. 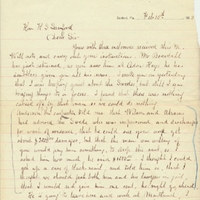