A letter from E. R. Trafford to Henry Shelton Sanford (1823-1891), dated March 29, 1883. Among other topics, Trafford noted the withdrawal of state lands from market near Suwannee County, Florida. He also informed Sanford that Senator Beck was in Enterprise and would be "over [at Sanford, Florida] tomorrow." He was presumably referring to Senator James B. Beck (1822-1890), a Democratic Senator from the state of Kentucky and member of Senate Committee on Transportation Routes to the Seaboard. The letter also mentioned that there were "five steamers at the Wharf." 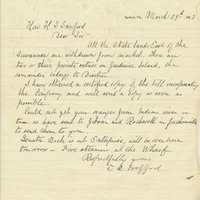