A letter from E. R. Trafford to Henry Shelton Sanford (1823-1891), dated May 12, 1883. In the letter, Trafford offered updates about a number of topics, including a lawsuit carried out by Alexander St. Clair-Abrams (1845-1931) against Sanford, the Plant Syndicate buying controlling interest of the South Florida Railroad, as well as improvements to Commercial Street in the City of Sanford, Florida. The letter, filled with sensitive rumors and sarcastic remarks concerning Sanford's rivals, lends insight into the relationship between Sanford and his local agents based in Florida. 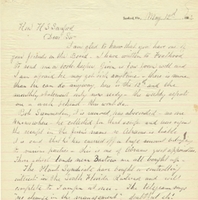