A letter from E. R. Trafford to Henry Shelton Sanford (1823-1891), dated May 19, 1883. In the letter, Trafford updated Sanford on several areas of importance, including the company efforts to sell the Sanford House Hotel, the progress of the South Florida Railroad line extending to Tampa, various tracts of land for sale in Florida, improvements to 1st Street in Sanford, and also matters concerning company sales. 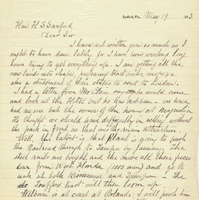