A letter from E. R. Trafford to James Edmundson Ingraham (1850-1924), dated August 23, 1882. In the letter, Trafford informed Ingraham about the company efforts to buy lands from the U.S. Department of the Interior, an endeavor that was met with some difficulty because the governmental department "would not permit any one person to purchase more than 640 acres in one day" and "also refused to receive applications from persons outside the United States." Trafford also included a report of the lands in question. The report indicated the quality of the land, including its capacity for crop cultivation, its proximity to bodies of water, and its connection to lines of transportation and communication. The report highlights the questions and concerns regarding land investment during the period and also indirectly demonstrates the hardships faced by potential settlers in sparsely-settled regions. 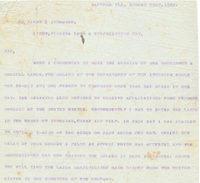