A letter from E. R. Trafford to Henry Shelton Sanford (1823-1891), dated September 11, 1883. In the letter, Trafford informs Sanford about the struggles of the Sanford Sawmill, asking tersely "where is that hundred dollars a day that Crolly promised? Where is any profit at all?" Later in the letter, Trafford points to "gross mismanagement" as a primary culprit for the mill's struggles. It is unclear who the man referred to as "Crolly" is, as he does not appear elsewhere in the correspondence, but based on the context of the letter, it appears plausible that Crolly was someone closely linked to the Sanford Sawmill. 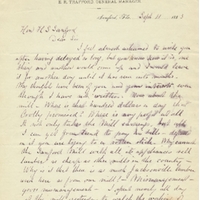