Letter from Trafford to Sanford (December 7, 1883)

A letter from E. R. Trafford to Henry Shelton Sanford (1823-1891), dated December 7, 1883. In the letter, Trafford provided a brief update about Sanford, Florida, noting that "we have quite a building boom." He also added that there was a need for a post office in the town of MacKinnon, a settlement that was along an unspecified railroad line. Finally, he expressed interest in meeting with Sanford to "go over" various land acquisitions. 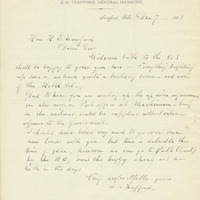