A letter from William Beardall to Henry Shelton Sanford (1823-1891), dated December 28, 1883. The letter provides updates on company lands in Anclote, Florida, and its environs. Beardall describes efforts to drain water from company land in Anclote, which was a small settlement near Tarpon Springs, with the ultimate goal of making the land cultivatable. In the letter, he also discusses the state of "communications from Cedar Keys[sic] and Tampa," which he found to be "very bad," mainly because the "Lake Buller Villa Co. arrangement of tri-weekly steamer having fallen thro[sic]." He also informed Sanford that guests continued to visit Tarpon Springs, "but not many," adding that a hotel in the area had recently opened and that "Governor Safford" was there overseeing development. He was presumably referring to Anson P. K. Safford (ca. 1830-1891), former Republican governor of the Arizona Territory from 1869 to 1877, who played a major role in the founding of Tarpon Springs. He also briefly informs Sanford about the founding of a town in Central Florida called Minneola, noting that it was beset by transportation issues because of the lack of a railroad connection.

Beardall was an Englishman who worked for the Florida Land and Colonization Company (FLCC) at its local office in Sanford, Florida. He served as an assistant to the company agent, E. R. Trafford. Beardall had worked previously for the Scottish industrialist Sir William MacKinnon before joining the FLCC. The FLCC was a joint-stock venture that invested in Florida land development and sales in the 1880s and early 1890s. The company was formed by Henry Shelton Sanford with help from a group of British investors. Located at 13 Austin Friars in London, the company was officially registered in London on June 10, 1880. With the formation of the FLCC, all of Henry Sanford's Florida properties were transferred to the company in exchange for a ₤10,000 cash payment and another ₤50,000 in company stock. Sanford was named President and Chairman of the Board. In 1880, the company owned 26,000 acres scattered across Florida, including in the cities of Jacksonville, St. Augustine, and Sanford, as well as in Alachua and Marion counties.

Almost from the outset, there was serious friction between the British board members and Henry Sanford. Disagreements erupted over business strategy, as Sanford frequently proposed initiatives deemed too bold for the cautious British investors. As a result of consistently meager profits from its inception, following Henry Sanford's death in 1891 many of the investors lost the motivation to continue. On September 15, 1892, the various directors acted to dissolve the company. Its assets, including roughly 65,000 acres of Florida land, were divided among shareholders. 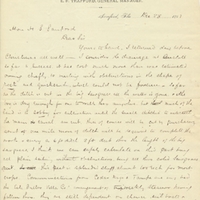