A letter from E. R. Trafford to Henry Shelton Sanford (1823-1891), dated December 24, 1883. Contents included discussion of a petition for a Post Office in MacKinnon, Florida; indication that "fifteen cars of logs in today from Longwood - 15 more to come Wednesday"; and that William Beardall was returning to Sanford. 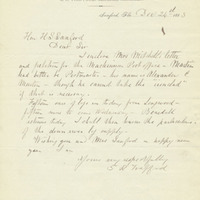