Cornerstone of New $500,000 Hotel Will Be Laid on Tuesday

Cornerstone of New $500,000 Hotel Will Be Laid on Tuesday

Newspaper article on the Sanford Chamber of Commerce's plans to begin construction of the new Forrest Lake Hotel, which was expected to cost $500,000 to build. The construction of a lakefront hotel in Sanford was first proposed by mayor and president of Seminole County Bank, Forrest Lake. In 1925, construction of the building began. Local architect Elton J. Moughton designed the hotel. On January 4, 1926, Hotel Forrest Lake opened and became a popular destination for tourists visiting Sanford.

Named after the Sanford Mayor and president of Seminole County Bank, the Forrest Lake Hotel has also been known as the Mayfair Inn and was briefly occupied by the Sanford Naval Academy. In 1916, construction of the building began. Local architect Elton J. Moughton designed the hotel. In 1925, Hotel Forrest Lake opened and became a popular destination for tourists visiting Sanford. By 1929, the hotel closed after the stock market crash and the downfall of Florida's tourism and real estate boom. William E. Kirchhoff leased the building in 1934 and the hotel reopened in 1935 with the new name Mayfair Hotel. Under Kirchhoff's ownership, the Mayfair Hotel became known as one of the finest hotels in the South. Kirchhoff sold the hotel in 1948 to Horace Stoneham, owner of the New York Giants. Stoneham then sold the building to the Bernard McFadden Foundation who later sold it to the New Tribes Mission. The New Tribes Mission's goal is to reach tribes who have no access to the Gospel through translated publications and missionary work.

Digital reproduction of photocopied newspaper article: "Cornerstone of New $500,000 Hotel Will Be Laid on Tuesday," The Sanford Herald, April 11, 1925.

Originally created and owned by The Sanford Herald.

Cornerstone of New
$500,00 Hotel Will
Be Laid on Tuesday

Plans are being worked out by R. N. Pearman, Jr., secretary of the Sanford Chamber of Commerce for the laying of the cornerstone of the new $500,000 hotel next Tuesday evening. Howard Hulick, head of the company erecting the hotel is co-operating in arranging for the ceremony and it is exuected that a large number of citizens will turn out.
The Chamber ofCommerce and all other civic bodies of the city will take part. The band will be present and several addresses made. The exact hour and the complete program is expected to be announced on Monday.
In the meantime work on the hotel is progressing rapidly and Mr. Hulick assures the members of the Chamber of Commerce that the hostelry will be ready for occupancy by the beginning of the next season.
That Sanford is getting plenty of publicity from the building of the Forrest Lake Hotel even before the cornerstone is laid is the fact that this afternoon, Hulick & Hulick are sending out notices to their 4,000 patrons of Loch Arbour Hotel at Allenhurst, N.J., of the opening of the Loch Arbour Hotel for the summer and included in this announcement was notice that the Forrest Lake Hotel of Sanford would be open on Jan. 1, of 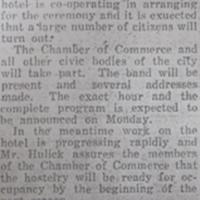